You will pay the property in the property's local currency. You can use this field for disclaimer text or anything else you want your clients know before booking.

We are sorry, this accommodation is not available to book at the moment

Far far away, behind the word mountains, far from the countries Vokalia and Consonantia, there live the blind texts. Separated they live in Bookmarksgrove right at the coast of the Semantics, a large language ocean.

A small river named Duden flows by their place and supplies it with the necessary regelialia. It is a paradisematic country, in which roasted parts of sentences fly into your mouth. Even the all-powerful Pointing has no control about the blind texts it is an almost unorthographic life One day however a small line of blind text by the name of Lorem Ipsum decided to leave for the far World of Grammar.

The Big Oxmox advised her not to do so, because there were thousands of bad Commas, wild Question Marks and devious Semikoli, but the Little Blind Text didn’t listen. She packed her seven versalia, put her initial into the belt and made herself on the way. When she reached the first hills of the Italic Mountains, she had a last view back on the skyline of her hometown Bookmarksgrove, the headline of Alphabet Village and the subline of her own road, the Line Lane.

This property only accepts cash payments.

All children under 8 years stay free of charge when using existing beds.

WiFi is available in all areas and is free of charge.

Free private parking is possible on site (reservation is not needed).

We are sorry, there are no reviews yet for this accommodation.

Austria….The land of Oompah music, apple strudel and lederhosen. A fantastic choice for winter or summer.Full of charm, atmosphere, tradition, picture postcard towns and villages, Austria is an ideal
country to visit for groups, couples and families.The key to ski holidays in Austria is the country’s celebrated ‘Gemütlichkeit’ culture, which attempts to make guests feel welcome, entertained and well
fed, both on the slopes and after the lifts have closed.Many of the resorts offer very large and variable ski areas to compete with anywhere, serviced by some of the most modern lift systems in
Europe.

The service excellence and hospitality that you encounter all over the country is guaranteed to leave you with a warm glow even in the cold winter weather. You’ll find the typical Austrian welcome both on the slopes with genuinely friendly and helpful instructors and lively après-ski in almost every Austrian bar when the lifts have closed. Or even before they have – the partying starts early in
many resorts and it’s a familiar sight at many of the resort’s mountain huts to see skiers dancing while still in their ski boots skiing back down the slopes in the early evening.

Much of the accommodation in Austria are good quality, family-run hotels, with many on a half-board basis, offering good quality mountain food. Many of them have a wellness area which is a big part of Austrian life, so you can usually expect a spa, or at least a sauna and steam room.There is also a good choice of quality apartments, self catered chalets and in a few areas like St Anton or Solden, you can find your traditional catered chalet, with other areas offering a more bespoke catered option.We are happy to help, advise and recommend suitable ski areas and accommodation in Austria to
enhance your Austrian experience. 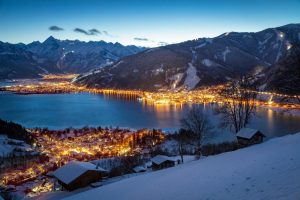