Chalet Etringa is a well located 4 bedroom , 2 bathroom, semi detached chalet for up to 8 people, nicely located, just 550m from the centre of Chatel and 800m from the Super Chatel lift, with the free shuttle stopping close by. The chalet offers a well equipped kitchen, log burning stove, flat screen satellite TV, comfy seating and 4 twin bedrooms, which can be made up as doubles.The 2 bathrooms either have a shower or a bath, as well as a WC and there is a separate WC as well. This is a good choice for people wanting a quality 4 star choice with easy access to the centre of Chatel, a 5 minute walk away as well as the lifts. Offered on a self catered basis or with a unique and very popular semi catered basis, where your 3 course evening meals are pre cooked and then frozen for you to defrost, reheat and eat. Discounted ski passes available for this chalet option.

We are sorry, there are no reviews yet for this accommodation. 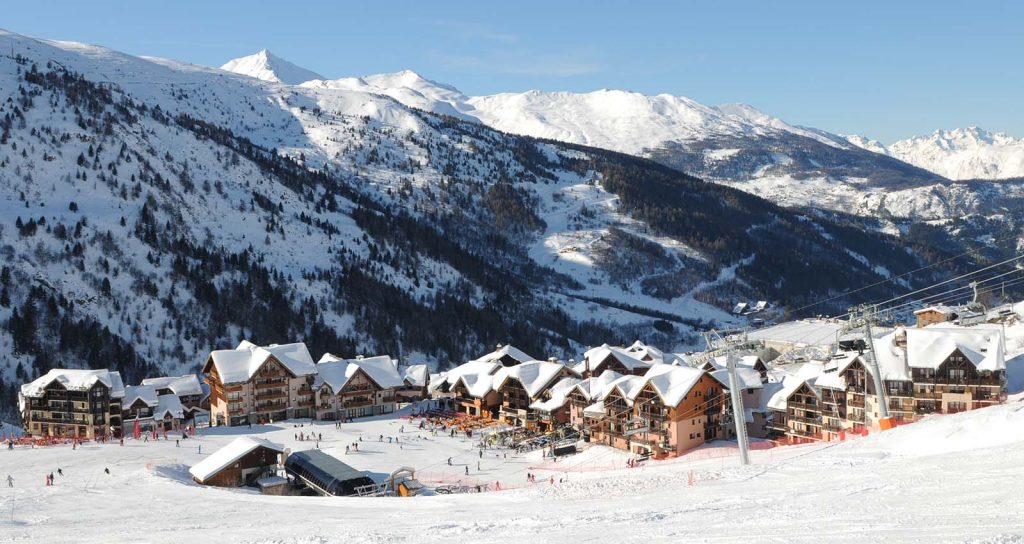 France is the most popular Alpine country for British skiers and snowboarders and generally offers a more modern aspect of skiing in relation to towns and villages with many villages built around convenience for skiers and boarders alike.

There are of course a number of traditional French ski resorts. Courchevel is a key gateway to the vast area of the ‘Les Trois Vallæcopy;es’ which claims to be the biggest linked ski region in the world. Its rival is the Portes du Soleil network of ski areas (with Avoriaz and Morzine at its heart) which spreads across the French border into Switzerland.Pretty much the same size as the 3 Valleys, but both argue as to which is the largest, but its a close call.

The Three Valleys is dominated by four major resorts: Courchevel, Mæcopy;ribel, Les Menuires and Val Thorens – the highest ski resort in the Alps. Each of these four resorts has more than enough terrain to keep a skier or boarder happily and easily occupied for a week or more during a skiing holiday in France, so the opportunity to ski all four, as well as La Tania and St Martin de Belleville, provides innumerable options.

In the Portes du Soleil, neighbouring Avoriaz and Morzine are gateways to a dozen or more family ski resorts in France and Switzerland. Chamonix, dominated by the Mont Blanc Massif, is another major attraction with several resorts scattered along the valley, including Argentière, rated by some keen off-piste skiers and boarders as one of the best ski resorts in France – or the entire Alps for that matter. They will also be keen to try the Vallæcopy;e Blanche – a classic off-piste descent – with a high-mountain guide.

Another resort overlooked by the impressive Mont Blanc is Flaine, linked with a handful of resorts including Les Carroz and Samoens, with some of the most extensive slopes in France. That’s even more true of the Tignes-Val d’Isère Ski Area – the linked areas of Val d’Isère and Tignes – formerly called Espace Killy after the celebrated Olympic triple-gold medallist Jean-Claude Killy. Together these  neighbouring resorts provide some of the most exciting skiing in France, particularly for off-piste enthusiasts. Tignes has the added advantage of regular glacier skiing on the Grande Motte glacier and like Val Thorens is regarded as THE most snow sure French resorts.

Two more giants of the French skiing world which are co joined and undoubtedly among the best family ski resorts in France, are La Plagne and Les Arcs.The area is known as Paradiski, linked by a huge cable car. La Plagne has a dozen or so linked hamlets and villages spread across slopes in all directions, while Les Arcs too, like Courchevel, has a handful of ski villages and satellite resorts at various altitudes.Arc 1950 and Vallandry are favourites.

La Clusaz is a traditional pretty village with some great skiing and ideal for people looking for a short transfer from Geneva.Great for families, short breaks or just for a week its a lovely traditional village we rate highly.Megeve, also offering a short transfer from Geneva, is a larger traditional village with a modern twang and again rates highly on our list for aesthetic beauty and convenience.Definitely another must see and ski resort.

Further south in the French Alps and accessed via flights to Grenoble and Lyon, are two more great resorts: Les Deux Alpes and Alpe d’Huez. High and snow sure and in the same part of the world, one the same ski pass, is the fabulous Serre Chevalier ski network, linked with the UNESCO world heritage site of Briançon and enjoying the wonderful Roman baths in Montier.

Montgenèvre also deserves a mention and if flying into Turin, the transfers are short, plus you have the opportunity to ski in both France and Italy during your ski holiday. Montgenèvre also boasts some of the best snow conditions in the French alps. Family friendly and snow sure La Rosiere also shares the same pass with La Thuile also in Italy and comes recommended especially as peak times as its quieter than other French ski resorts.